From the plateau of Saint-Julien, one can spot Château Talbot in the distance in the midst of an ocean of vines, parks and tall trees.The estate has a rich history. Its name originates with Connétable Talbot, Earl of Shrewsbury, governor of Guyenne as well as being a famous English military commander, who was defeated at the battle of Castillon in 1453. In 1855, at the time of the Médoc and Graves growth classifications ordered by Emperor Napoleon III, Château Talbot was promoted as a fourth classified growth of Saint-Julien. For several decades it belonged to the Marquis of Aux and was the purchased in 1918 by Désiré Cordier.

The Connetable de Talbot St. Julien from the Bordeaux wine-growing region, aged in barrels, is displayed in the glass in bright crimson. The bouquet of this Bordeaux red wine impresses with notes of blackcurrant, mulberry, blackberry and blueberry. If we continue to feel the aroma, we add toasted barrique, Mediterranean herbs and green peppers.

This dry red wine from Château Talbot is just right for wine lovers who like it absolutely dry. Balanced and complex, this dense and silky red wine presents itself on the palate. The finale of this well-ripened red wine from the Bordeaux wine-growing region, more precisely from Saint Julien, finally convinces with remarkable reverberation.

Drink this red wine from France ideally tempered at 15 - 18°C as a companion to cod with cucumber mustard vegetables, rum pot or Boeuf Bourguignon. 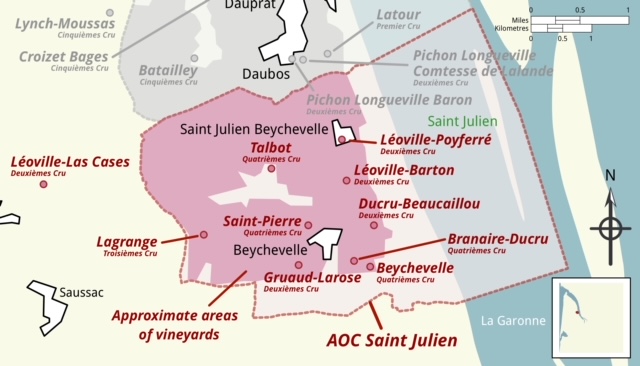