Château Branas Grand Poujeaux is located in Grand Poujeaux, hamlet of Moulis-en-Médoc renowned for the exceptional quality of its terroirs.

It all began when Justin Onclin, aware of the potential of his terroir, bought Château Branas Grand Poujeaux in 2002.

He then had a double ambition: to respect the heritage and roots of this estate, while giving it a visionary impetus and a new appetite.

“I wanted the work of rehabilitating the Château to be both a restoration of the existing structure and the creation of a symbol of our quest for excellence.” Justin Onclin

In a few years, with strength and freedom, he built a pure and modern place, conceived an authentic universe and elaborated a just, powerful and elegant wine.

Nestled comfortably between two illustrious neighbors, Châteaux Poujeaux and Chasse-Spleen, Château Branas Grand Poujeaux, enjoys a 17-hectare terroir centered around the ancient gravel sediments of the Grand Poujeaux plateau, on the most eastern side of the appellation.

The Grand Poujeaux plateau offers among the best terroir of Bordeaux. In terms of geology, the soils are Garonne gravel from the Gunz period with underneath the Saint Estephe calcareous sediments are the same as the First growth terroir in Pauillac and Margaux. This is the “insider secret”.

These poor and generous gravelly soils both provide excellent natural drainage and encourage deep rooting of the vines revealing the complexity of the different layers of the terroir.

The estate is divided into 12 plots on the Grand Poujeaux plateau which are all small vineyards on their own with their own terroir identity, a chosen grape variety and a planting age. This particularity shapes the complexity of the wine of Château Branas Grand Poujeaux. 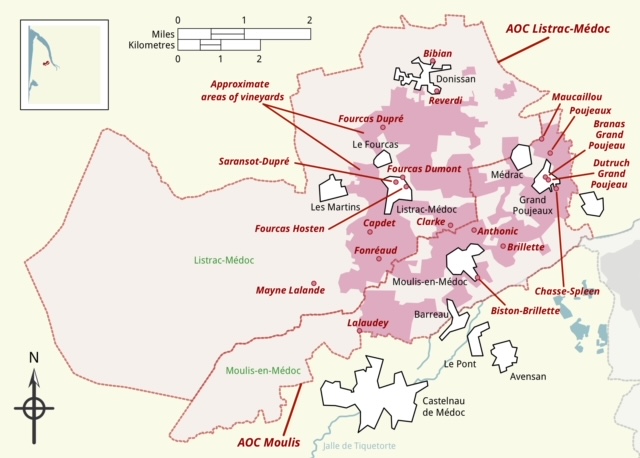 Appellation: Moulis-en-Medoc
Region: Bordeaux - AOC Moulis-en-Médoc
Estate: Château Branas Grand Poujeaux
Grapes: 50% Merlot 45% Cabernet Sauvignon 5% Petit Verdot
Did you know?: Since 2018 Château Branas Grand Poujeaux is certified as “Haute Valeur Environmentale III”, the highest level of a responsible and ecological agriculture.
Specifications
Intense color ranging from ruby ​​to garnet.
Black fruit notes with cassis and blackberry, followed by fragrances that vary between vanilla and roasting.
he young reds are full-bodied, marked by a hint of oak and hints of sweet spices. The tannins will become melted as it ages.
17 C
Lamb, red meats, roast guinea fowl and hard cheese
You may also like