North of a small village named Saint-Lambert, the « Château Fondabet » is located on an excellent terroir, among the greatest wines of Pauillac which are Château Mouton Rothschild, Château Latour, Château Lynch-Bages, Châteaux Pichon Longueville Baron and Comtesse.

It’s at the end of the Ancien Régime, in 1789, that we can find in the public records the report of a vineyard in Fondabet.

The Peyronie family, the current owner, can put forward really ancient wine-growing roots since their ancestors were already present on the Pauillacais terroir in 1700.

As soon as the end of the thirties, Robert Peyronie undertook to create a vineyard using vines on the verge of extinction or vines sold in auction sales, like Fonbadet and the Tour Duroc Moulin. He bought even more vineyards in the wake of the Second World War and gave the name Fondabet to his best vintages.

Today, and after twenty years spent working with her father Pierre Peyronie, Pascale, jurist by training, is taking over from him combining the respect of the traditions and the use of modern techniques.

The permanence on three centuries of the presence of vines on its soils, the nobiliary origins of the constitution of the Cru and its brand, the fact that the prices reached by its wines before the Bordeaux Wine Official Classification of 1855 ranks it among the future fifths Crus Classés of Pauillac, the vigour of its rebirth after the Second World War, place the Château Fondabet at the top of its category.

The sites of the terroirs of Domaines Peyronie are situated on deep knolls of Graves with a well-carved profile, with an altitude ranging from 14 to 22 metres.

These soils constitute, by their very nature, the main geopodological element of the terroirs of Classified Grand Crus, from Margaux to Saint-Julien, from Pauillac to Saint-Estèphe.

The nature of the Graves soils and colluviums of the Château Fondabet vineyards is therefore identical to the one of the Medoc Classified Grand Crus. 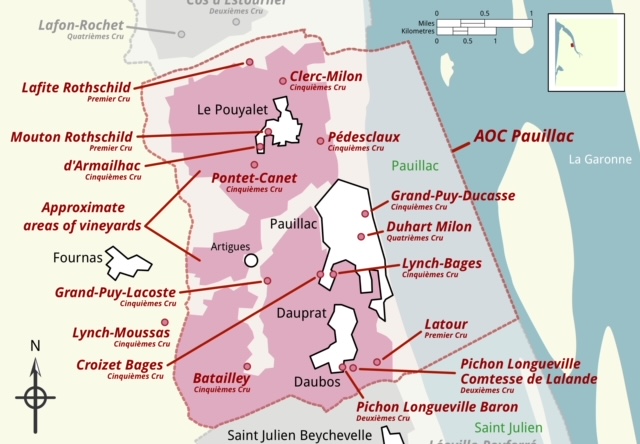 Appellation: Pauillac
Region: Bordeaux - AOC Pauillac
Estate: Château Fonbadet
Grapes: Cabernet Sauvignon 80% Merlot 20%
Did you know?:
Specifications
Dense, dark garnet colour, drawing on purple in its youth.
The aroma consists of black and red fruits, roasting, licorice and leather.
The Pauillacs are vigorous and tannic, which softens with age which allows the tannins to melt and give a nice and round structure.
17 C
Roasted lamb, game, rib of beef on the bone and fried mushrooms
You may also like